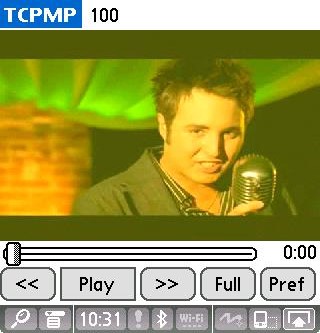 The ultimate freeware media player for Palm OS! TCPMP (The Core Pocket Media Player) is an advanced video and audio player with support for a broad variety of formats and dozens of tweaks to customize your playback experience.

This package includes the latest version of TCPMP plus all available plugins. The base TCPMP application supports basic video and audio formats such as .AVI and .WAV, while plugins provide decoding for proprietary formats such as .MP3, .MP4, .AVC, and more.

On devices with low storage, it is recommended only to install plugins for the formats you specifically intend to use. Other users may wish to only install the FFMPEG plugin instead. While it is quite large, it adds support for numerous formats by itself, including many of those supported by other plugins.

Note that while TCPMP is a highly versatile media player, video playback is highly demanding on CPU and memory and will most likely require content encoded specifically for your Palm device to run properly. Videos should be no larger than your Palm’s native screen resolution and encoded at a bitrate of approx. 750 Kbps or less, depending on CPU speed. You can convert existing video files and DVD movies to compatible specifications using free conversion tools such as FFMPEG or Handbrake. Or, use FFMPalm by PalmDB to generate files tailored to your Palm device!