What is Palm Day?

When Palm OS was first developed in the mid-'90s, its creators clearly didn't expect anyone to use it forever. For a device that sold itself on date keeping, the internal system clock is surprisingly limited, and in fact is running out of time "soon". Borrowing the standard set by contemporary operating systems such as Mac OS, Palm's calendar begins in 1901 and adds time until it reaches the largest number it can compute. 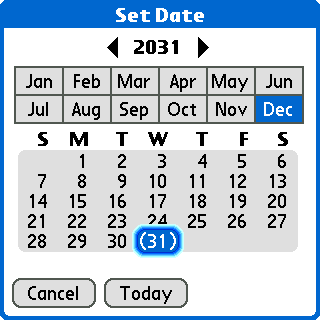 When this date is reached, all standard Palm clocks will be frozen, unable to tick one second more. It's not all doomsday, though. Palm OS itself doesn't particularly care about the date, and most apps will continue to work just fine. But Palm Day will mark the end of an era nonetheless.

Palm helped kickstart the smartphone revolution that changed the way humans live and communicate forever… and it all began with a simple calendar.