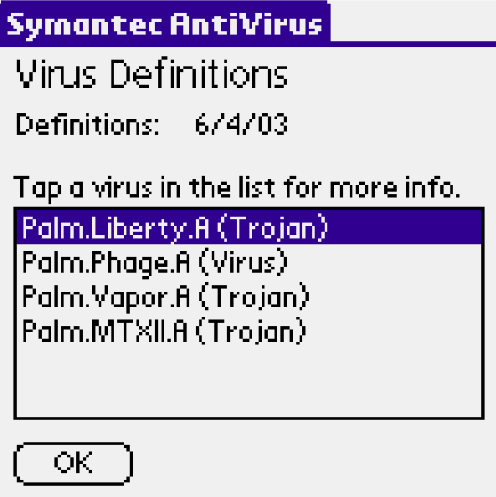 You've heard it. Antivirus for PalmOS. The epitome of uselessness.

In 2000, Symantec Corp. discovered some unique viruses. They were written to attack Palm OS handhelds. It was only a matter of time before a hacker figured out how to exploit this operating system. In response, last year Symantec created Symantec AntiVirus for Palm OS. Recently, the company released a new version: Symantec AntiVirus 2002 for Palm OS

There were only 4 viruses known to exist on PalmOS: LibertyCrack, Phage, Vapor and PEMagic. The first 3 are all discovered in 2000 with the last one being unknown.

Program seems to be missing "valid virus definitions". It still opens up regardless.