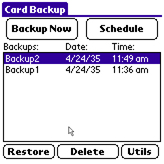 Keep your most valuable information safe!

More than likely the information on your Palm is the most valuable information you own. Keep it safe with CardBackup. Especially great when you're on the road and don't have the ability to HotSync your Palm. Use CardBackup and make sure your information is safe.

PalmOS 5.0 Compatible, Including the new Tungsten3 & TungstenE Full Backup and Restore of Palm handheld to any MMC, SD, and Memory Stick cards.

Schedule backups so you don't have to worry about your palm ever! Partial Restore, only restore the Palm application or database you need. Keep multiple backups on each card.

Can use the Memory card for other purposes (storing applications, photos, MP3s) as well as backups!

Utilities to make CardBackup run whenever you place the card into the Palm.

What are the differences between the Registered and Shareware version?

The two main differences are Scheduled Backups and Partial Restores. Scheduled Backups allow you to setup a schedule of backups and CardBackup will automatically perform those backups at the scheduled time. This way you don't have to remember to backup your handheld, CardBackup remembers for you! CardBackup allows you to have seven different schedules. So, for example, using two schedules you can setup one to backup every night at say 3am and the other to backup weekly every Friday at 4am.

Partial Restores allow you to individually select a database for restoration. This is useful when you have just deleted something by accident and need to restore that "one" database. You can run CardBackup and select a partial restore and only restore that one database.