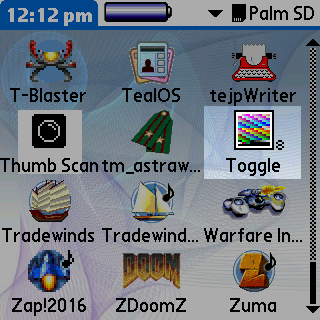 With devices spanning from the early 1990s to late 2000s, Palm used many different screen technologies. While the earliest models used simple black-and-white LCDs, this palette soon expanded to multiple shades of gray, then 8-bit color, then 16-bit and beyond. As a result, many applications became locked to a certain screen technology, and won’t display correctly on newer models.

That’s where Toggle comes in. Toggle is a simple app that cycles through all color modes available to your Palm device to improve compatibility with older applications. There’s no UI and no settings to fiddle with, just tap the Toggle icon and the next available color mode will be applied. The Toggle icon itself will then change to indicate the current screen mode: 1-bit (black-and-white), 2-bit (gray), 4-bit (gray), 8-bit (color), and 16-bit (color).

Note that each color mode will be cycled even if your device doesn’t support it. For example, on an 8-bit color screen, you will need to tap Toggle twice to switch to 1-bit. The 16-bit setting will revert to 8-bit in between.

Also note that OS 5 devices might not reflect changes within the launcher itself. However, color modes will still be cycled, which can be seen upon opening any app that supports multiple color modes.