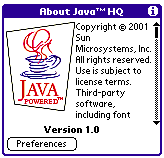 This is a Java 2 Micro Edition (J2ME) compatible Java Runtime Environment (JRE) for Palm OS, that was released by IBM in March 2004.

This is required for running Java-based applications on Palm OS, such as the Opera Mini web browser.

The package below contains many files, but most applications only need J9JavaVMMidp20.prc, located under the ...\JVM\ARM4T folder, to be installed on your Palm device. Other files in the same folder add optional localization support for a variety of languages.

This runtime supports running MIDP apps ("MIDlets"), including support for the JSR75 and JSR172 extensions.

For applications which require file or database access (JSR75), also install PIMPrefs.prc, fileconnect.prc, and pimop.prc from the JSR75 folder, plus any desired localization of PIMPrefs.

The included JavaVMCheck_enUS.prc test application will verify your installation of the IBM WebSphere Micro Java VM.

There is also a JarToPrc windows executable included for converting your own Java MIDlet / J2ME apps to be able to run on Palm OS using this runtime.