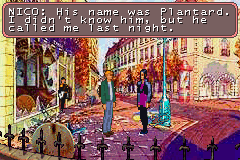 Originally created for PC and PlayStation®, and now available for Palm OS® and Windows Mobile® handhelds, Broken Sword is the story of George Stobbart, an American tourist on vacation in Europe, who becomes embroiled in a terrifying conspiracy when he witnesses the theft of an ancient manuscript and the assassination of its owner.

The manuscript, created in the 14th century by the order of the Knights Templar, points to where their legendary power has been hidden for over six hundred years. Befriending a photojournalist, Nico Collard, the two find themselves on a global trail that ultimately reveals a deadly secret that will change their lives forever.

Can you solve the mystery of the Broken Sword?

The Palm OS version is essentially a port of the GBA version, which also has various guides and reviews available.

Released in 2005 on Palm OS by Astraware.

No registration information available. This version of the game has been patched to unlock all contents.

Please feel free to message me on the PalmDB discord for any Palm OS software upload requests. :-)