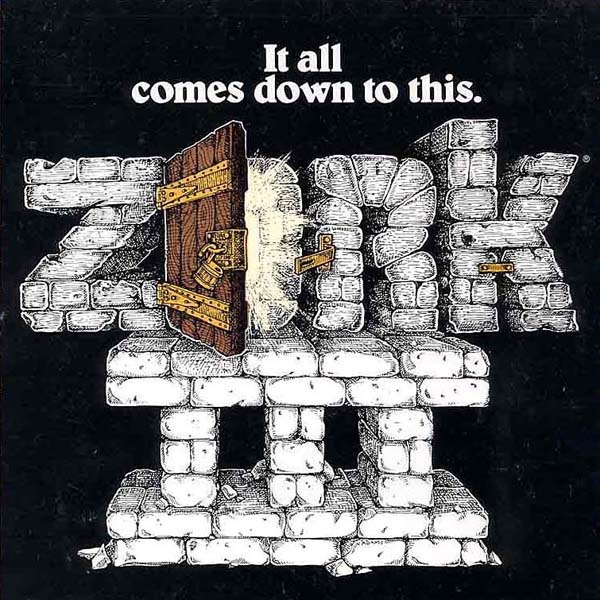 Z-Machine interpreter (Frobnitz for Palm OS) is needed to play this game! Converted to PDB with Frobnitz Palm 1.02 z2pdb.exe

Zork III: The Dungeon Master is an interactive fiction adventure video game written by Marc Blank, Dave Lebling, Bruce Daniels and Tim Anderson and published by Infocom in 1982. It was the third game in the popular Zork trilogy and was released for a wide range of computer systems. It is Infocom’s fourth game.

The player begins at the bottom of the Endless Stair from Zork II.

Zork III is somewhat less of a straightforward treasure hunt than previous installments. Instead, the player—in the role of the same “adventurer” played in Zork I and Zork II—must demonstrate worthiness to assume the role of the Dungeon Master.

The player must get past the Guardians of Zork, with the complete garb of the Dungeon Master, and then endure a final test. The player must be wearing the amulet (found at the bottom of the lake), the cloak and hood (received when the player chooses to look under the hood of the vanquished opponent in the Land of Shadow rather than deal the final blow), the staff (received from the man at the Cliff for helping him retrieve the chest of valuables; attacking the man in any way or trying to take the valuables from him inevitably breaks the staff), the strange key (found in the Key Room when the player uses the grue repellent (from Zork II) to get past the dark places), the royal ring (retrieved from the Royal Museum by using the gold machine to travel back to the year 776 GUE), and the black book (found in the Royal Puzzle).

Unlike Zork I and Zork II there is a time-sensitive event, an earthquake which is randomly triggered about 130 turns into gameplay. The player must retrieve the key before the earthquake (when the Aqueduct is broken, leaving no escape route from the Key Room) and can’t complete the Royal Puzzle or retrieve the ring until after the earthquake (when the unopenable Great Door breaks). Also unlike the previous two Zork games, the lantern is of little relevance. It is needed only to walk through the dark areas of the Junction, Creepy Crawl and Foggy Room at the beginning of the game (often done after completing the Land of Shadow, Cliff, and Flathead Ocean—saying “Hello, Sailor” to the Viking yields an invisibility vial—tasks). Another light source, the torch from the Scenic Vista, is used to retrieve the repellent from Zork II and deposit it in the Damp Passage via the teleportation table to provide a light source for the return journey after retrieving the key.

Once the player has all the items, they must give the waybread to the elderly man in the Engravings Room, who reveals himself as the Dungeon Master once fed, to find the doorway leading to the final hallway. Here the “elvish sword of great antiquity” is used to block the beam in the Beam Room. Next the adventurer must get through the Guardians of Zork. This can either be accomplished by using the complicated Mirror Box or by simply drinking the invisibility potion in the vial from the Flathead Ocean. When the player knocks on the Dungeon Master’s door he will only open it if the player is fully equipped (see above). He then tells the adventurer that he will obey their commands and follow them to help solve the final puzzle. The corridors lead to a parapet which overlooks the fiery cells. Reading the book here reveals a map of “The Dungeon and Treasury of Zork” which has 8 cells, one of which with a bronze door that leads to the Treasury of Zork. The eight positions of the dial in the parapet correspond to the 8 cells.

The adventurer must use trial and error at this point to summon the cell with the bronze door and have the dungeon master return it to its original position by replacing it with any other cell. The key will now unlock the door revealing the Treasury of Zork, which contains the wealth of the Great Underground Empire as well as a controlling share in FrobozzCo International. After this victorious discovery, the Dungeon Master appears and transforms the player into a duplicate of himself, signifying the player’s succession to his position.

Steve Meretzky said in 1984 that “the worst bug that ever got out was in Zork III“; having the sword during the last puzzle makes the game unwinnable. “We call things like that our ‘fatal errors’; we caught that one relatively early on”, he said.