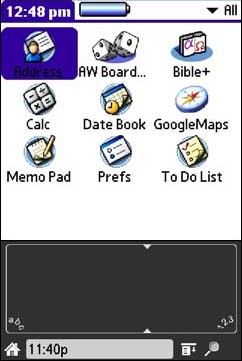 Garnet VM is a Palm OS Emulator built on the ACCESS Linux platform. Unlike other emulators and simulators, Garnet VM emulates an ARM architecture which theoretically enables high compatibility with existing applications.

The emulator is provided in binaries for Windows and Linux. It is highly recommended to view the included documentation for information on setup, usage, and command line parameters.

A custom ROM based on Palm OS 5.5 is included with the emulator by default, but loading custom ROMs is supported as well. It is also possible to network HotSync custom ROMs running in Garnet VM with Palm Desktop, allowing native installation of regular Palm apps. However, no HotSync application is included in the default ROM.